I saw that someone was writing Pythagorean theorem in 3 dimensional space. The equation was :

$$c=\sqrt{x^2+y^2+z^2}$$ If it's really correct than Pythagorean should work in higher dimensional space either. So I can write that

pythagoras right-triangle
posted 8 months ago
CC BY-SA 4.0
5mo ago by zavier‭
deleted user
Permalink History
Why does this post require moderator attention?
You might want to add some details to your flag.
Why should this post be closed?

One generalization of the Pythagorean theorem to three dimensions is de Gua's theorem:

This generalizes to higher dimensions: an $n$-dimensional simplex (a shape made of $n + 1$ vertices in $n$-dimensional space, all the edges that connect them, all the triangular faces that those edges create, all the tetrahedra that those triangles create, and so on up to $(n - 1)$-dimensional hyperfaces) with a vertex all of whose edges are pairwise perpendicular to each other will satisfy the property that the square of the measure (length, area, volume, etc.) of the hyperface that doesn't contain that vertex is equal to the sum of the squares of the measures of the other $n$ hyperfaces.

Another generalization of the Pythagorean theorem to three dimensions is simply the three-dimensional Euclidean metric: the square of the distance between two points in three-dimensional space is equal to the sum of the squares of the separation between those points along each of the coordinate axes, assuming some Cartesian coordinate system. In two dimensions, those axial separations form the sides of a right triangle, with the hypotenuse connecting the two points; but you could equivalently say that those axial separations form a rectangle, and the two points are connected by a diagonal of the rectangle. That latter visualization is more useful in higher dimensions: in three dimensions, you can't make a single triangle out of the segments anymore, but you can picture a rectangular prism formed by the two points on opposite corners with sides parallel to the coordinate axes, and the lengths being squared are three sides of the prism and its diagonal. 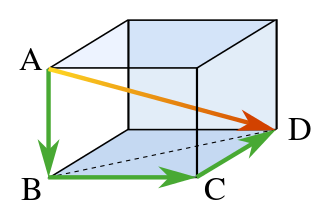 This too generalizes to $n$-prisms in $n$-dimensional space.

(And both of these generalizations are themselves special cases of this!)

r~~‭
718 reputation 1 31 68 31
Permalink History
Why does this post require moderator attention?
You might want to add some details to your flag.

Derek Elkins‭
764 reputation 2 21 80 8
Permalink History
Why does this post require moderator attention?
You might want to add some details to your flag.